So my daily calendar writing prompt a couple of days ago was pretty cool. SO I thought I'd share it with you... 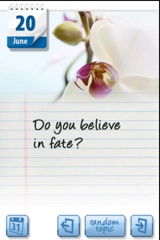 Do I believe in fate?
Well first lets define it.
Per sir google
fate
/fāt/
Noun
The development of events outside a person's control, regarded as determined by a supernatural power.
Verb
Be destined to happen, turn out, or act in a particular way: "it was fated to end badly".
Synonyms
noun.   destiny - lot - doom - fortune - kismet - portion
verb.   destine - preordain - ordain
Now lets go!
Do I believe in it? Yup. There are so many times in my life that my life has been changed by fate...
I met an ex boyfriend in a cab IN KENTUCKY he was my driver for a 15 minute car ride. I felt so connected to him that I asked him to do the rest of my driving for the week  - he agreed and by the end of the week we had already talked about him moving up... Do I believe that I was meant to meet him? Yup! Does the fact that we didn't work out negate that fate? Nope! John taught me how to love, he also taught me EVERYTHING I didn't want in a partner and prepared the pathway for the hubs to enter my life forever! 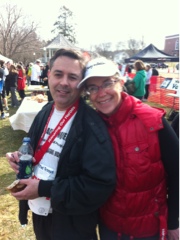 (At a race because he loves me and I love racing)
The poodle - ha! He was fate for sure :-) I wanted an adult, female, white poodle... I went to meet with his breeder to learn about the breed. I told her on the phone "I hate puppies" (and I do) but she invited me down anyway to meet her adult dogs... Welllllllllll we met mr. man and the rest is history! He was an adorable 4 days old when we first met him - we actually met his entire litter but the minute I held him I KNEW he was coming home with me! 9 weeks later he did! A MALE, CHOCOLATE PUPPY! He's my fated pupster
Then: 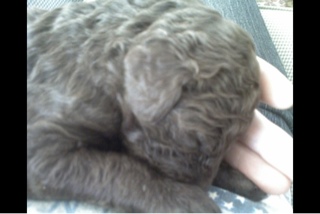 And now: (doesn't he just get cuter and cuter?) 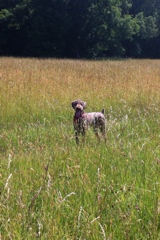 The little house - ahhhhh my house I love my house! So we had put the old house up for sale and although we had an offer we still had to keep our open house... So the hubs the poodle and I decided to drive to check the progress on my nephew and niece in law's new home (they built) and on the way there we saw an open house sign, we pulled in, walked in (all 3 it was a hella hot day), and both the hubs and I felt immediately at home and the poodle took a deep sigh and laid down. We knew this was meant to be our home. Ironically we were just waiting for the open house at our old house to be finished before we put in an offer on a townhouse (I can't remember now whose first choice it was but it wasn't both of ours - we had a top 3 and if I had them 1,2,3 hubs had them 3,2,1 we ended up picking by polling our friends and letting them pick...) bite FATE had different plans for us and instead of a condo/townhouse we are in a cute little house! 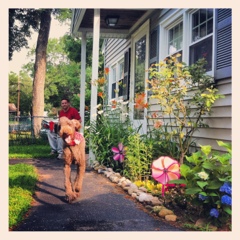 How is that possible??

So a while ago I went to see Jillian Michaels. 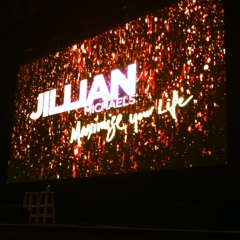 I found out we were getting upgraded to VIP seats and I jumped up and down - and promptly fell. Womp womp! I broke my phone... 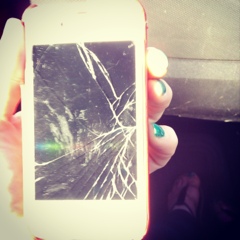 But I wasn't eligible for an upgrade for 2 more weeks - I figured I'd suffer and survive. Well the two weeks has long come and gone (almost a month ago) but I can't decide what phone to get... Do I get the iPhone 4S because it'll be crazy cheap or the 5 because its the "latest and greatest"
Either way I want this case 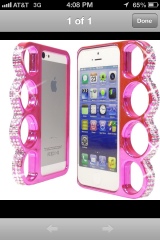 Because really, why not have a blinged out brass knuckles esque case right?
But the moral of this is my current phone is a 32 gig 4 so I went to see how much space I'd need (so I could figure out how much the new phone would cost) and THIS is what I see: 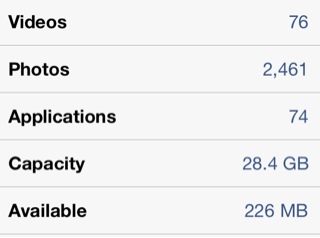 I'm sick and the poodle is old

I've now been sick for a week solid, it's getting old!
Speaking of getting old - right before I got this stupid summer cold we had the poodles birthday party! It was cute (smaller than ever before owing to the rain and I uninvited most if the dogs since the party would be IN my house) but still a nice day and I think mr man was happy! 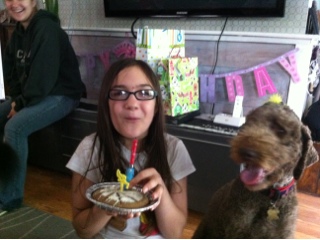 My niece blew out the candle for him!!! 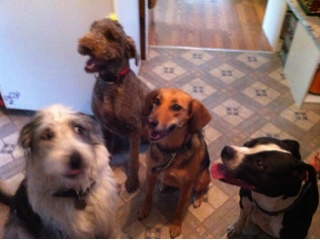 He is now four years old....
The nursing home we volunteer at had a party for him as well... All the cute old people sang! It was great!
Do you celebrate your pets birthday? Or have any home remedies that work for summer sickness???
Posted by AlwaysJoy at 6/05/2013 06:01:00 AM 2 comments: