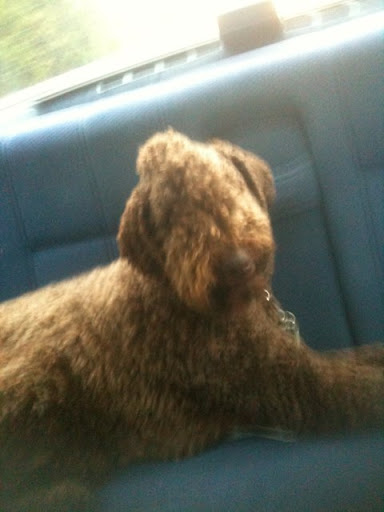 "Life is a succession of lessons which must be lived to be understood."
Ralph Waldo Emerson

I woke up yesterday feeling very muchly like a failure... A very early in the morning thought was "what kind of moron does not keep her wallet (which is really a wristlet) on her wrist while trying on shoes?" and decided I was going to turn my day and attitude around! Mondays are a therapy day (Thursday's and Fridays too) so I had that going for me.

Spent the morning working on the house and then went off to therapy and decided pupster and I were going for a hike in the rain when I got back... I could take a break from cleaning we both needed it. Well, when I got back pup didn't greet me and that's when the day changed!

Pup (it appears) fell down the stairs (probably tripped on the box of books I left at the top because I can't carry it) and could not move.

I carried him out to the car and drove him crying to the er vet... X-rays came back he tore a tendon and some muscle in his right hind leg. He got some ivs and some pain killers and some separate anti inflammatories and needs to be on rest for a week! But he'll be fine - and that's all I needed to hear! and I think drugged pupster is awfully cute!

Yesterday he taught me that losing a wallet = inconvenience. Keeping a friend = priceless. Thanks for the lesson pupster!!! (next time maybe a couple kisses instead of scaring me to death, mmmmkay?)

I'm hoping today is boring and tomorrow's blog will be fun! Missy from beautiful struggle (aka one of my favorite recovery bloggers) asked what I was doing to save $ these days and I actually wanted to chat about that!

oh Im so thankful pupsters is ok!! You have had a rough week! Im thinking of you, and guess what!? you won a giveaway on my blog! yay!! so hopefully that gives you some more smiles today!! Hope your little cutie is feeling better really soon!! Tammy