And I find and create a lot of ideas though considering I have over 2200 pins I'm going to go with I don't do nearly as many as I find. (Click the picture to be brought there and get directions)

But! I saw this one in the middle of yet another sleepless night and patiently (if patiently means being annoyed that stores aren't open at 5 am and starting this post at 6:30 prior to stores being open because I'm that sure that they will A be cute and B I will love them) waited until morning to create my own!

I followed her instructions (almost) exactly and created my own little masterpieces. The only difference was I went to the dollar store and bought bandanas and ribbon instead of fat quarters and raffia (it opened earlier than Joanne's) and decided not to whine about it since the place was packed with people buying candles and batteries because they were out of power still and I only wanted to add a decoration to the bathroom.
The sticks were the only remnant of hurricane sandy left on my front lawn... 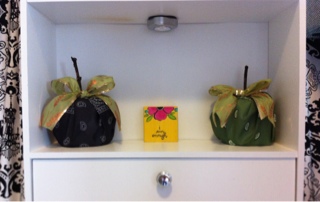 Those are adorable. Seeing something like that makes me think I should take a look at Pinterest.

Those are super cute! I don't frequent Pinterest as often as I used to. It's such a time suck for me! I try to check it out about once every other week, though. :)