Lightning, neighbors and a poodle

It came rained, thundered, lightninged scared the living shit out of me (my fear level is off the charts lately - I'm not sure why but I'm working on it) and broke the power, about 15 minutes later it was gone and soon after the power turned on. During this time mike the mailman (the worlds best mailman) stops by and tells me I look rough I told him I was afraid of lightning he says "that's the worst storm I've ever seen it was right over the lake - I even pulled over, don't want to be driving in it" and I smile and think well at least it's over.

Not so fast Joy Joy! About an hour later it was back. Even nastier than before. It touched the lake and a tree on my street. I shook like a leaf - the poodle shook like a leaf. I couldn't figure out which way to look because it was all around us. Again we lost power - this time it took a couple hours to come on.

After this I sent the pic below to hubs saying "hey daddy I survived and so did momma"
About 45 minutes after the power came on that beast of a storm came back (now its like 6:30) and she slammed us one more time this time hitting a transponder and leaving us in the dark until after 9. The house was hot and muggy!

Now what does all this have to do with my neighbor? She heard me mentioning to mike I was scared. And when it came back she came over and sat with me, we talked about zucchini and childhood games and everything else! When the storm was gone she got up to leave and told me any time it stormed to just pop over to her house no need to be scared and alone.

What am I taking from yesterday's storm - not that lightning sucks (it does though)? I'm taking that great neighbors are worth their weight in zucchini! 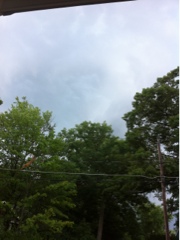 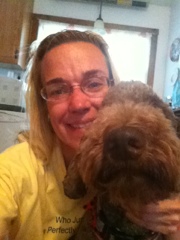 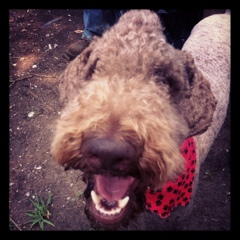 What a great neighbor! Definitely zucchini-worthy.