So tomorrow is my 9th wedding anniversary.
A few years back I asked hubster "if you knew then all of (sweeping hand motion) this, would you do it again?"
His reply "no"

I was crushed! He saw it and explained that he wouldn't have thought he could have dealt with a mother in law dying in front of him, 2 horses dying in his arms, a wife with an eating disorder and who occasionally goes crazy. But not only has he dealt with it (his words here not mine) it has made him a better stronger person than he knew he could be.

Today I was at the bank and mentioned that it was our anniversary tomorrow and I needed to grab a card. My teller (a friend) asked if I would do it again - I thought... Yeah I would. There's no one else I'd like to grow into my full potential alongside.

I called hubster and said ewwwww I'd marry you again (and told him about the bank) he said yuk that's like cooties! And I remembered again why I married him.

He can make my way too serious self laugh.

He gets up quietly and cleans up when I get sick to my stomach in the middle of the night.

He understands that I am really afraid of lightning (fear of fires from the old house burning down) and goes out in the horrendous hail (last night) to be sure the house wasn't struck because I was shaking so hard.

He knows that pupster is sometimes the only thing that'll make me happy - and he's just glad it works, he doesn't need to be the hero.

He watches any chick flick with me! And circus (I love the circus)

And when I'm proud that I've saved us money he writes texts like this:
(yup I'd do it all again - and fortunately so would he) 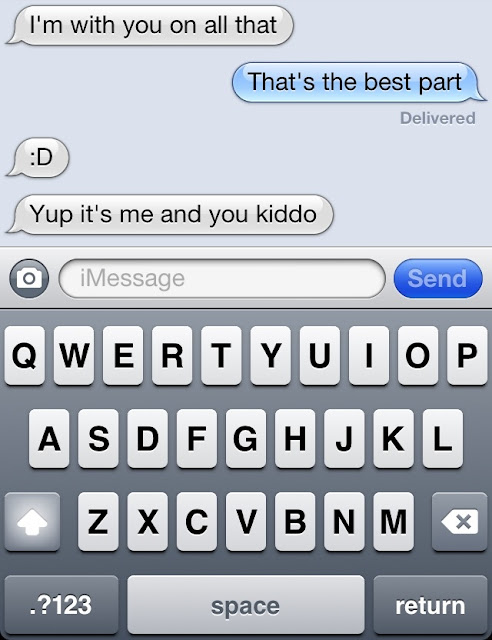 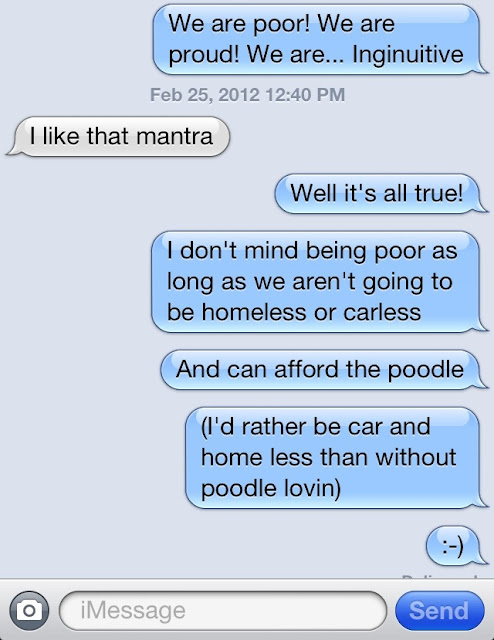 Happy Anniversary! You two are still sweet and cute together!