So I had a dream last night (and no I'm not mlk - his dreams inspire generations, mine make me want to punch people) I had wrapped a present in fabric (I think long sleeved shirts) that I kept tying in knots, I think I was trying to be creative (I blame this on my 3 sleepless hours from 1-4 where I perused Pinterest).
But the hubs WOULD NOT stop teasing me about this. I woke up and seriously thought about waking him up to give him a piece of my mind (or a knuckle sandwich) but I decided against that and am instead sharing the story with you. #winning (for him at least NOTSOMUCH for you)

It's Friday and I'm filling and you should Play along here

1. Wow, this is ending up being a wordy post as I'm hella opinionated today
2. I hate trivia (I mean as in trivial pursuit - I like when people give me random facts) last weekend we had friends over for games the man wanted to play trivial pursuit his wife was like "Joy hates that game" ironically we ended up playing a game I liked even less!
3. Finally, I'm warm, now I HATE to be one of "those people" who complains about the weather but... 8* can kiss my ____.
4. staying in other than when i go to the gym is all right with me but it's making the poodle depressed and led me to googling Zoloft for dogs (see depressed poodle pics - you totally would have googled it too)
5. Sweet or savory: I hate that I always make up my own answer to shit but sour.
6. I got lots of compliments on a pair of leggings I wore the other day: they're new to me but I don't think they are new I bought them on eBay for next to nothing
7. And as for the weekend, tonight I'm looking forward to spin and trx tomorrow my plans include working on and hopefully mailing a gift to a friend and of course the gym and there's a rumor (aka the weather channel) that it might be warm enough to go out! and Sunday, I want to I'm going with the hubs to an adult puppet show (lord help me this does NOT sound like a joy thing) and I have Pilates in the morning.

Do you remember your dreams? I usually don't 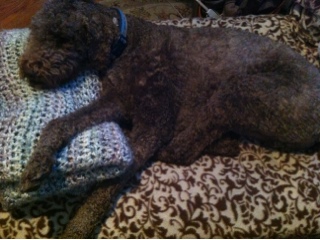 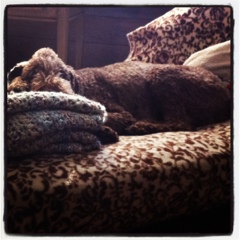 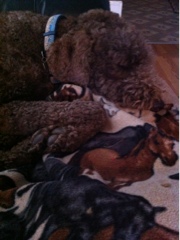 Hi Joy, i'm a new follower and thought i'd drop a line to say hello. Feel free to check out my new blog!
I rarely remember my dreams, except for the really vivid ones, or ones that I have found funny. Have a great Friday!

I hate waking up mad at Mr BC when I dream.

I've had a few dreams where I fought with my husband and then woke up mad at him. Poor guy!! Hope you have a great weekend!