Yeah so the other night hubster and I were watching tv and pupster kept looking at me. And then looking to his right and then staring me down. I was laughing at him asking if Timmy had fallen into the well... Finally I decided to wrestle with him thinking that's what he wanted and as I pushed him playfully I felt it a peanut sized lump at the base of his jaw... To say I freaked isn't quite descriptive enough.

But, ironically as soon as I knew what was going on and in charge (as much in charge as you can be when you call the emergency vet and they say wait until morning because they won't be able do anything at midnight - and call his breeder who tells me to relax get some rest and deal with it in the morning) pupster relaxed he put his head on my lap and fell asleep.

I called his vet at 7:31 the next morning (they open at 7:30) and had a 10:00 appointment (with his favorite vet at the practice) after a biopsy to rule out cancer and rule in what it was (a highly swollen lymph node) pupster was diagnosed with his second major battle with Lyme disease... He has a lowered immune system because of having gotten it so young the first time (4 months) and so is more susceptible... I left the vet with a new round of meds and positively jovial... Perspective huh? Anyone else finding out their dog has Lyme would probably be sad but me? I heard its not cancer!

(ps pupster is insured but not against Lyme) 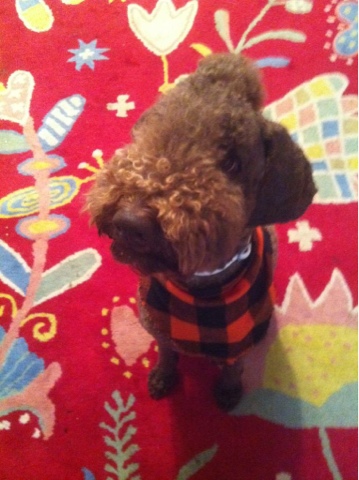 Oh goodness, I'm glad he's okay (or that it's not cancer)!! That's so scary. Bowser has this weird itty itty bump on the bridge of his nose, and I brought it up to the vet at his last appointment. She just looked at me and was like "It's a bump. It's okay." People don't understand ... they are our children!!

Bowser is not insured, not because I don't want to but because it's not a financial priority at the time. I want to get him insured soon, though. What company do you go through?

Oh my goodness - that is the cutest dog ever!

Yep, I heard the same thing "not cancer!"

We don't have insurance for our dog - just the yearly check ups, although he's getting old.

The last time I took him to the trails he was so tired I had to lift him in the car - and he weighs 80 pounds!

Whoa! I'm glad it's not cancer and that you caught the lyme early. And no, no pet insurance for my guinea pig.