So this weekend was the shower for my nephew and his fiancé.
They are absolutely 2 of my favorite people on the planet! Actually they're the parents of the "cousin" dog that the poodle and I often go walking with.
So that means I wanted to get them something nice in my (pathetic) budget... On Wednesday I got to looking at the registry and found that they had registered for a dual shower head at bed bath and beyond! This was perfect! It was $50 and I had a 20% off coupon so it came to a wonderful $40 which let me stay in my budget :-)
So this text with my sister happens: 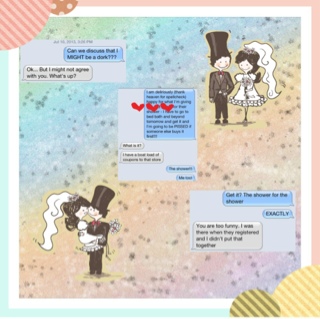 After much freaking out I called and they let me buy it over the phone AND use my coupon and they held it for pick up! Win!!!!
Well... When you're me just giving a shower for a shower isn't enough! Oh no you must wrap said gift to look like a shower ;-)
I bounced ideas off the hubs and the sister... Hubs was just not in and the sister well she tried REALLY hard to care (it is after all her son getting married) but she lost a good friend Wednesday and so she just didn't have creative wrapping in her but told me it'd be awesome!
Then this happened: 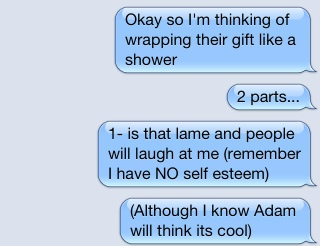 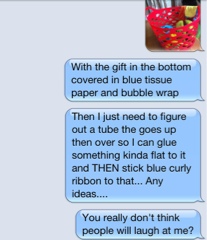 But the sister said it was perfect and promised me nobody would laugh...
After a trip to the dollar store (where I bought a noise maker, an oil drip pan, curling ribbon bows, blue shimmer tissue paper and bubble wrap) I came up with this: 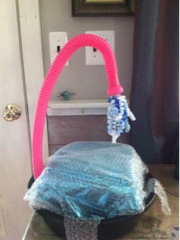 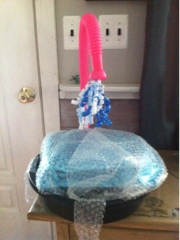 The soon to bes LOVED (and giggled about) the wrapping saying how awesome it was to get a "shower gift" and then when they opened it the bride to be laughed and laughed and said "joy you win! Best most creative gift/wrap ever and this is why I love you"
And so all in all it was a success I'd say :-)
Do you wrap creatively for showers? Or am I alone here?
Posted by AlwaysJoy at 7/08/2013 09:24:00 AM