On running and such

Last night I ran a race. I know weird huh? A race on a Tuesday night but there it was.
I'm sick and have been for a few days, and I wouldn't have run this race if it wasn't the third in a series and the three races together made up a whole medal (quite cool really but it sucks when you're not feeling good). 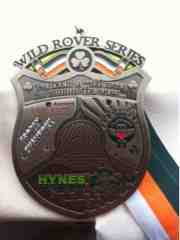 Anyway I left the house telling the hubs I didn't know if I was walking or running - either way I didn't feel good but there were benefits to both, I was pretty sure if I walked I wouldn't puke (sorry for the tmi) but it would take me forever and I would just be out there feeling crappy for 3 long miles.
Well I got there and to make a long story quasi short I decided to run - just to get it over with. I stepped in behind a man who looked like he was in pretty good shape but not a speed demon and figured he'd pace me without even knowing it. And he did! For the first mile and a half ~ then he stopped to walk I was like wtf buddy you're my pacer but I just trudged ahead. I ran without music (I have a headache so noise is bothering my ears) and in sun glasses (light is hurting my eyes) and I just ran. This wasn't a omg I love to run type of run it was a lets get it done run. As I hit 2.6 miles I was passing a nice guy who cheered me on with a go get it girl! Seriously if I wasn't sick I think I'd have turned around and hugged him! I finished the 5k, grabbed my medal and t and walked back to my car (seriously didn't stop for any of the cool post race stuff they had - though I think I'll join this whole series next year) and drove home. At a stop light I stopped to look at my run keeper app to realize that I just had a 70 second pr. Pretty cool huh? Now I wish I had at least enjoyed it!
When was the last time you PR'd? And have you ever had a weeknight race? This was a first for me - it was a makeup race for one that got snowed out in February!
Posted by AlwaysJoy at 5/08/2013 07:06:00 AM

Personal record. You know me - I'm slow but last night I was almost speedy

Good for you! It looks like I'll be doing my first 5k in June - a fun kind of run. I'm both looking forward to it and scared!

BUT whatever because I KNOW this is srsly awesome. Go Girl!

Missy,
You're awesome!!
Let me note though - I've done NOTHING since then. For the first time in months I've taken rest days - my body has demanded it!